Exploring Noesa (Nusa) Lembongan and Penida in the 1930’s 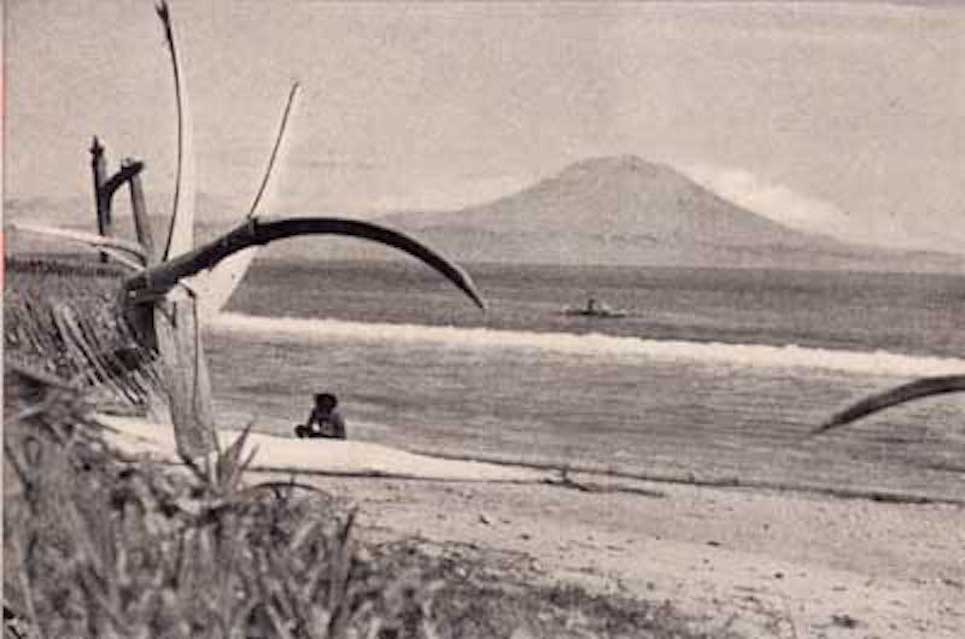 Exploring Noesa (Nusa) Lembongan and Penida in the 1930’s

Claire Holt was an Australian who first visited Indonesia in the 1930’s.  After Holt’s first exposure to Indonesia she was left with an overwhelming and enduring impression of the integration of art in the spiritual and the daily lives of its people. It was this persuasive interplay that held Holt in Indonesia for ten years,  and kept her researching, advising, teaching, and writing about Indonesia for the remainder of her life. Holt visited the islands of Nusa Lembongan, Nusa Penida and Ceningan in 1935 and her article: “A Short Exploration Trip to Noesa Penida” was published in 1936. The crossing from Bali took 6 hours – a far cry from today’s 35 minute transfers! Claire’s 1935 article is below, complete with old spellings – we have added some modern-day conversions in […] to help!

“From the south-eastern coast of Bali one may sight on a clear day, almost within reach, the greenish-violet mass of another island. It has no sharp peaks of high mountains, no spectacular curves in its formation. Just an evenly rising mass with fairly steep slopes toward the sea. One is told that this is Noesa [Nusa] Penida… and very little more.

It is natural that one should be curious about so close a neighbour of Bali. Looking up books, however, does not prove very helpful. Information about this island and its inhabitants seems very scanty indeed and among the known facts one finds the following: that originally the island’s name was simply “Noesa”, which is to be translated as ‘the island”; that “Penida”, later attached to it, means pamor – the white metheorite metal worked into krisses; that on early Dutch maps appeared under the name “Noesa Pandita” (pandita – wizard, recluse) and, finally, the English sea-fearers chose to designate it as “Bandit Island”. This last name, aside from its phonetic relationship with “pandita”, had its justification in the evil reputation of the island, for it was the place of banishment for all criminals and undesirable subjects in the kingdom of Kloengkoeng [Klungkung] to which it belonged. Thus a small Siberia of Bali!

All these and similar questions, which could find no ready answer anywhere, prompted our small expedition. There were three of us, myself, Jane Belo, and W.Spies, and our interests were divided: our “arts-and-crafts department” was mainly interested in the architecture and sculpture of the temples and also wanted to make special inquiries about the local weavings. Family customs were the chief interest of the other member of our party. And I myself was most anxious to see some dances of Noesa Penida as compared to those in Bali and Java.

By proa to Lembongan

So on a beautiful quiet morning, just before the rays of the sun burst into the drowsy skies, our two “djoekoengs”, [jukungs] shaped like big narrow lightblue fish with upraised tails, and resting on the outriggers as on wings, were pushed off the shore at Koesamba [Kusamba], a small mohammedan settlement at the south-eastern coast of Bali. On the shore stood like little toys rows of grey square houslets which are in some way connected with the production of salt. As our djoekoengs were struggling away from shore, jerkily brought forward by the round paddles of their owners, the violet top of Goenoeng Agoeng [Gunung (volano) Agung] appeared very high up above the clouds, as if benevolently surveying our departure. And below, on the shore, the rows of the tiny uniform grey houses seemed to be marching off in humble discipline. And then the sails were hoisted and we turned to Noesa Penida, our boatmen silently praying for favorable winds, which would save them all the rowing.

With favorable winds one could sail across to Lembongan, an oblong small island near the “noesa besar” (big island), in about four hours. Having to struggle with currents and adverse breezes however, we spent six hours in the djoekoeng before we could set foot on the beach at the village Djoengoetbatoe [Jungutbatu]. There is another, still smaller, island, Tjeningan [Ceningan], between Lembongan and Noesa Penida and its legendary origin is an overturned prahoe.

There was once a man from Java who came to Bali in a prahoe, the legend relates. On his way back the Goenoeng Agoeng obstructed his way. So he ran against the mountain of the gods wanting to split it, with the unexpectedly natural result that his prahoe overturned and was thrown aside to the place where Tjeningan lies now, this name being derived from the name of the overbearing man from Java. The anchor of the ill-fated prahoe is still seen in the big rock across the straits near the coast of Bali. A scientific and philological explanation of Tjeningan would simply be ‘Little island” and very little the island is indeed.

After all these digressions let me say that we wanted to walk through Lembongan and Tjeningan first before entering Noesa Penida proper. What a different atmosphere from Bali! One senses it the moment one sets foot on Lembongan. In the first place, the desa [village] Djoengoetbatoe itself has an original appearance all its own with everything speaking about the sea. Wherever possible shaggy sea-stones are used for construction. The enclosures of the houses and the main streets are lined with low walls made these porous and irregular grey stones. In some of the yards, filled with the heavy odour of drying fish, lie extraordinarily large sea-shells [clam shells]. We were puzzled by quantities of oblong, flat snow-white bits of something hung in the yards on lines and obviously drying in the sun. They were slices of katella [cassava] later to be stamped into flour, which, together with djagoeng [jagung /corn], constitutes the main food of the population, here as well as on Noesa.

At the southern end of the main street the way leading across the island starts upwards in wide steps, almost in little terraces, hewn into the slope of the stony hill. The vegetation is that of a land poor with water. Big cactuses, low trees, sudden patches of green, small flowers. On the whole, something as one would imagine Palestine to be or perhaps some rocky part of Spain. No abundance of little streams and pantjoerans [fountains] as in Bali. The villages, if fortunate, have deep wells, and if very fortunate, of sweet water, and near the well is the bath, which has as water vessel a large rectangular stone, hollowed out like a sarcophagus without cover and placed on the wall of the enclosure surrounding the bath. But for us these enclosures were by no means an assurance of privacy during our trip – they served as marvelous observation points for all children, of the various desas where we stopped, as might easily be imagined.

Leaving Djoengoetbatoe we came across a strange effigy put up near the entrance of the temple of the death-goddess, the Poera [Pura / temple] Dalem. It was a flat long figure cut out of the spine of a palm leaf, without arms or legs, and only with a round disk at the top on which human features were drawn by chalk. Little matted bags of withered palm leaf (ketipats) were suspended at each side of the effigy and a multitude of offerings scattered nearby. This was something to be investigated and proved of special interest to our “family department”. We were told that this effigy was a “tjemplongan” which is customarily put in front of the Poera Dalem when a newborn child reaches the age of one month and seven days. There is a similar custom in Bali, only there the shape of the effigy, its name, the placement and its point of time are different. As far as I know it is put near a river or at cross-roads, but this matter concerned our “family experts”.

It does not take more than forty-five minutes, perhaps, to cross the whole island of Lembongan. We lingered however on its highest ridge before descending to the south coast. Here, magnificently situated, lies the Poera Poeseh (temple of the ancestors) of the desa Lembongan [Lembongan Village]. Standing at its gate one can overlook the sea from both sides, Bali appearing at the north side and Noesa Penida to the south, preceded by little Tjeningan bathed in the brightest of blue-green edged by the snow-white of breakers.

The first gate of the Poera Poeseh Lembongan appeared of unexpectedly solid and beautiful architecture. Its crown-shaped top is flanked by four melon-shaped pieces which together are somehow reminiscent of the Prambanan temple in Java. In the niches of the gate, however, are several humorous looking figures of birds, apes and squatting men, the latter very similar to the figures on the gate of the former palace in Kloengkoeng.

As we found later Kloengkoeng is in general the centre of culture and fashion for Noesa Penida and its little brothers. A sort of Paris. Often would we hear a man say with pride: “this comes from Kloengkoeng”, or, “it was told to us by a man from Kloengkoeng”. Everything is relative indeed. What an important bright place Kloengkoeng becomes when one is on Noesa Lembongan and what an immense country Bali!”